Prince Albert died of typhoid fever on the 15th December 1861. Queen Victoria, who was deeply attached to her husband, seems inconsolable. She has sunk into depression and has gone into seclusion.

Throughout their marriage Prince Albert acted as Victoria's private secretary and she did nothing without her husband's approval. His interests in art, science and industry spurred him to organize the Crystal Palace Exhibition in 1851, which turned out to be a highly profitable industrial convention. As an alien prince he was initially unpopular, but in time the English came to admire him for his irreproachable character, his devotion to the queen and their children, and his deep concern with public affairs. His influence was particularly strong in diplomacy. His last contribution in that field was to intervene in the Trent Affair (see below) where he helped to diffuse the tension between the United States and Great Britain. 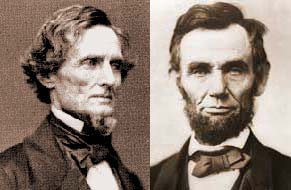 On the 6th November 1860 Abraham Lincoln was elected president of the United States of America. His anti-slavery agenda was judged unacceptable by many Southern States, whose economy would be badly hurt by the abolition of slavery. The Confederate States of America was formed on the 8th February 1861 and Jefferson Davis was selected as its first president the next day. The Civil War began when Confederates under General Pierre Beauregard opened fire with 50 cannons upon Fort Sumter in Charleston, South Carolina (April 12th - 4:30 a.m). By May, an eleven-state Confederacy had been formed with a population of 9 million, including nearly 4 million slaves. The Union, which comprised 21 states, had a population of over 20 million.

The Trent Affair: On the 8th November 1861, two Confederate officials sailing towards England are seized by the U.S. Navy. The British government has been demanding their release, threatening war. Lincoln eventually gives in and orders their release in December.

Read more about this story 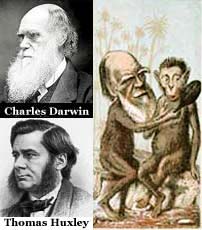 The journal, Natural History Review, has been bought by Thomas Huxley and other naturalists partial to evolutionary thinking.

The first issue had an article by Huxley which described man's relationship to the apes. He sent a complementary copy to Archbishop Wilberforce, whom, in a celebrated debate, asked Huxley on which side of his family he was descended from apes. Huxley responded by saying that he was not ashamed to be descended from apes on either side. Huxley has also been giving lectures to the poor working classes on the evolution of man from lowly apes. Such sermons seem to appeal to the working class, as the idea of man being a nobel creature makes their existence seem less harsh.

Admiral Walker, who commissioned the building of HMS Warrior, resigned in February 1861.

The government thought that HMS Warrior and HMS Black Prince, the first ironclad battleships built for the Royal Navy, were too expensive, and the navy was ordered to construct four smaller iron warships. The construction of HMS Defence, HMS Resistance, HMS Hector and HMS Valiant was started in 1859, and finished in 1861. They are smaller than HMS Warrior, do not have her speed or carry her superior firepower, and are not very seaworthy. Their only advantage is their manoeuvrability, and the absence of Warrior’s archaic bow. The first two of the smaller ships cost £237,291, and the second two also cost £237,291. Compared to HMS Warrior's cost of £357,291, they only offer about a quarter of the military value for two-thirds of Warrior’s price. George Francis Train, an American, introduced the horse-drawn street tram into Europe, opening the first stretch of line in 1860 in Birkenhead. This was followed in 1861 by the first tram line in London, which runs down the south side of Bayswater Road from Marble Arch to Porchester Terrace, and by two further short stretches of line. Although metal wheels running on smooth tracks in the road are much easier to pull than carriages running on uneven road surfaces, objections have already been raised about Train's choice of rail which consists of a flat plate with a step at one side. If badly laid, the step protrudes above the road surface, thus presenting an unacceptable obstacle to other vehicles.

Joseph Wilson Swan - The Genie of the Lamp

Joseph Wilson Swan, a physicist and chemist, born in Sunderland, is currently working on the development of a carbon-filament incandescent lamp. It uses a filament of carbonized paper in an evacuated glass bulb. Made from an arc-lamp element, Swan's carbon rod gives off light but does not last very long. Gases trapped in the rod are released when the lamp is activated, and a dark deposit of soot quickly builds up on the inner surface of the glass. Whilst there is still room for improvement, this new invention is undoubtedly a major scientific discovery and a giant step towards a brighter future.