Florence Nightingale's greatest achievement was to raise nursing to the level of a respectable profession for women.

In November 1856, Miss Nightingale took an hotel room in London which became the centre for the campaign for a Royal Commission to investigate the health of the British Army. When Sidney Herbert was appointed chairman, she continued as a driving force behind the scenes.

In 1860, with the public subscriptions of the Nightingale Fund, she established the Nightingale Training School for nurses at St Thomas' Hospital. The probationer nurses received a year's training which included some lectures but was mainly practical ward work under the supervision of the ward sister. "Miss Nightingale", as she was always called by the nurses, scrutinised the probationers' ward diaries and reports.

In 1861, she wrote "Notes on Nursing for the Labouring Classes", a book that gave advice to ordinary working class people, especially rural poor cottagers, about teaching "the art of health, which every mother, girl, mistress, teacher, child's nurse, every woman ought practically to learn." 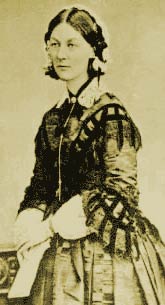 At the time of the census she was living at the Burlington hotel, 30, Old Burlington street, Westminster, London. With that information in hand, I set out to look for her census record in the London 1861 census CD set from British Data Archive.

The 1861 London CD set booklet said this piece was on CD 4, so loading this I clicked on the bookmark 110 and paged down to check to folio 111b, 30 Old Burlington street was on folio 110b. My search had finally ended; Florence Nightingale's entry was there in black and white:

If you have no idea what address your ancestors lived at check www.TheGenealogist.co.uk as they have name indexes for most census years. I later checked this out and it only had two Florence Nightingales, one aged 40 and one aged 3. The former having the reference: Piece 64 folio 110b. 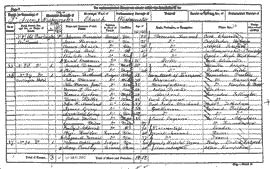 To view the full page (in Acrobat format), click here.